I leased a new Prius a few weeks ago. That’s right a Prius. Hollywood agent rolling on 15’s. It has a mode that lets you drive up to 25 mph all electric. Which in LA covers most freeway driving. Once upon a time I had a black Mercedes E430, blacked out windows, 0 to 60 in, now. Really fast car and it looked very cool. I called it my agent car. Unbelievable vehicle. Before I had it, it belonged to Paul Walker. His agent bought it for him to drive around when the original ‘Fast and the Furious‘ came out. He left the agent 4 months later, the agent took it back and sold it to me. But, the car never really fit me somehow. Or did it? Maybe it did at the time, or maybe I just changed.

I’d like to say that I’ve shunned the Hollywood image thing, but I’m not sure that’s even it. I think I just got pissed. Pissed at the price of gas. Not just the price at the pump. pissed at the human cost of gas. The oil wars, terrorism, the crumbling American society, all in the name of cheap gas and the oil company’s continued government subsidies amidst record profits.

So, I decided to vote with my wallet. I want to use the least amount of petroleum possible and encourage car makers to move to all electric in my lifetime. But, don’t give me too much credit. I could have gone the route my wife has advocated for years, which is to buy a diesel car and convert the engine to veggie fuel. Of course this requires putting a vegetable oil straining unit next to my garage. I just keep picturing myself trying to strain used fryer oil. Covered in grease while I try to clean enough Mazola to get me to Hollywood and back. Or, better yet, when the voice in the McDonalds drive through asks if I want fries with that, I could just respond “no thank you, I’m just here for a fill up.”

Anyway, what I’m getting at is values. I have developed certain values based on my experience. Those point me towards a Prius. My wife’s values point her in a more difficult direction and I must admit, while I respect and applaud her choice, I’ve held her back in her pursuit of a vehicle that emits nothing but a vague scent that reminds you of the Outback Steakhouse parking lot.

I’ve had clients who have refused to shoot Exxon commercials because of the Valdez calamity and still others that refused to shoot for McDonald’s because of their destruction of the Amazon for their grazing farms. Granted, that was a few years ago, before the economy tanked and work slowed. In actuality, I can’t say I’ve heard of anyone refusing to shoot anything on moral grounds for some time now. What does that say?

Just a few days into my Prius adventure, I was driving home on the 101, living my values to the fullest and I found myself climbing a hill and closing in on what appeared to be a 15 year old Ford, belching smoke and chugging up the grade at 40mph. As I smugly zipped alongside in my 50 miles per gallon Eco statement, I noticed all the windows of the Ford down, and a sweaty woman driving that had to be all of 22 years old. No AC, engine failing. someone just trying to get somewhere. 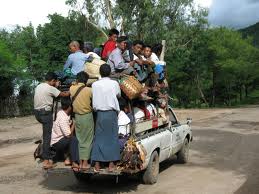 People just trying to get somewhere.

I’m beginning to come to grips with the idea that one’s values are relative to their situation and ever evolving. That’s ok because, well, it has to be. Gone are the times of Patrick Henry and “Give me great gas milage or give me death!” I cant argue with someone just trying to get somewhere. That’s a valid reason for driving a bomb of a car while the polar ice caps melt. But OK, this is a business blog right? What does any of this have to do with business?

Businesses have relative and ever evolving values also. At the beginning of this year, we at WPA got together to talk about ours. It’s not easy to talk about. Actually, It’s a rather esoteric discussion for a business setting. We came up with buzzwords, they were: customer service, forward thinking culture, positive attitude, ascension, tribe, family, innovation, top of mind. These are things we value a lot. They are not by any means all the things we value, but it gives us a reference point.

Sal about to 'go for a ride' in a Prius

There have been plenty of times where I have made tough decisions based on necessity and called them just business. We strive for the win/win situations where everyone comes away happy, but it just doesn’t work out that way every time. I always harken back to that scene at the end of the Godfather where they are escorting Abe Vigoda to the car to “take him for a ride. ” They say to him “It’s nothing personal, it’s just business” and Abe nods and gets in the car knowing full well what’s to come.

Values are a double edged sword. On one hand there’s the golden rule. On the other there’s what needs to be done for the benefit of the many over the benefit of the few. And let’s not forget about self-preservation. What must be done in business doesn’t always jibe with the Golden Rule. The inescapable truth is that to win in business, someone else must lose.

After all, in the end we’re all just someone trying to get somewhere. For every time I’ve made a decision that has an air of ethical justice, it seems there’s another time that may appear to others hypocritical or duplicitous on my part. However, I’m the one left with the decisions I make. I’ve read ‘The Art of War’ and I’ve read the ‘Bible.’ In reality both are full of humanity and both are pretty violent, but there are good lessons in both.

I do believe we’re entering a new era in business culture. I don’t believe that it’s necessarliy kinder or gentler. I’m mean layoffs are layoffs right? But, it is far more philosophical, far more based on the proven science of interaction and collaboration. What the most progressive business thinkers of todays view’s on values have in common are establishing a culture of  working towards a ‘common purpose’ based on shared values.

Film crews and theatrical productions have a natural common purpose.  It’s bringing a script to life.  The hiring of the crew and casting, is the process of finding the people who have not only have the requisite talent, but similar values to the creators of the project. For the cast and crew have to become co-creators in pursuit of the common purpose.  I’ve heard it time and time again when clients meet on feature projects that what the producers and directors are really looking for is the answer to this question: who do I want to spend the next 6 months with? In essence, they are looking for a values match.

So think about it.  What are your values? How can you express them? It’s not an easy question, but essential to answer.  When you have verbally committed them to yourself, others will be able to see them too!