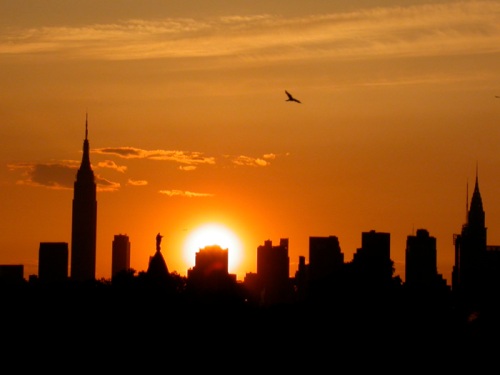 I’m really on the loose this week.  I’m in NYC with my son looking at colleges.  He’s 19 and ready to leave the confines of sunny LA (if you can believe that I’m talking about Hollywood like it’s a small town in Ohio) and move to Metropolis.
I lived in New York for a long time before moving west.  It’s nice to see it again through fresh eyes. His eyes.  The constant motion, the electricity and the all consuming energy. He can barely contain himself and it’s not just the novelty of the place.  He’s at the point in life where it’s all one great big possibility waiting to be realized, and I must say I’m jealous.  Not because I feel my possibilities have come and gone.  Believe me, that’s hardly the case.  I’ve got a lot of schemes left in me and I intend to use them all.  It’s much more about the excitement he feels being at this place in life.  He wants to study filmmaking, directing in particular.  He knows with certainty he wants to be here and nowhere else. He knows with certainty he wants to make movies and he knows  with certainty he’s going to make a mark on the world.
So, I thought, why can’t I feel that again?  That certainty, that artist’s “all in” mentality.  Then I realized, there’s no reason why I can’t.  I control my own feelings, right?  I can choose to feel that sense of endless possibility again. I can choose to push aside that voice of experience that says: we’ll see what happens. I can choose to wake each day with a fire in my belly ready to attack my ideas and see them come to life.  I mean really, where did it go? It’s still there, I just think the fire recedes over the years and is overtaken by concentration as you master the skill set of your craft.  It’s not that it isn’t there, it’s just a little covered over by the brine of a career.
So here’s my challenge: get excited about the possibilities ahead again.  Yes, that’s it.  The sum total of my lesson.  I can’t do it for you. Nor can I get you to change your thinking.  What I can tell you is that I’ve decided to do it for myself.  Just making that decision has me excited and motivated to try new things and push forward.  There are new deals and lots of financial possibility in this decision.  I’m thinking I’m going to need them, because I’m about to have a big fat tuition to pay.